I often think of my childhood friend, Will. I used to go over to his house all the time to play. I went so often that his mom and dad were like second parents to me. And I remember as a young teenager playing cards in his den when his baby sister came in and stepped all over the cards trying to talk to us and see what we were doing.

I was a Christian at 13, having grown up hearing about Jesus and believing in him from an early age. But all I knew of life at 13 was a safe and comfortable life with no real challenges or setbacks. Then we got a call from the prayer chain at church – Will’s little sister, Jane Wall, had been rushed to the hospital. Aspirin had caused her brain to start swelling and doctors were trying to relieve the pressure before any permanent damage or death resulted.

And everything with God was suddenly put to the test. Was God really there? Did he hear my desperate prayers for her life and health? Did he hear me wanting to trade places with her? I stayed up in the youth room at church praying most of the night. I cried, I pleaded, I made deals. And more and more time passed. Finally, we got the word… she had not died, but apparently there was serious damage to her brain – only time would tell how much. And I was terribly disappointed with God. I still believed, but I didn’t understand and could not make sense of what had happened.

In Zechariah, exiled people are finally returning to their homeland – to Jerusalem – to rebuild the city and try to resettle their great-grandparent’s country. God had finally answered all those desperate prayers and songs about going home – and the day had finally come. But Jerusalem was in ruin. And their were enemies all around. Was this really the answer to prayer? Had God really come through for them?

And then Thursday night of Passover week… Jesus had called his disciples together and taught them about true servanthood by washing their feet. And they began the Passover meal. What could be better than the great welcome the previous Sabbath, when crowds cheered their Lord, and this moment of fellowship together? Then Jesus starts talking about betrayal, and tells Peter he’s going to betray him by morning.

Is this for real?? Is this the life we signed up for?

Here’s the problem… life is a mixed bag. The rain falls on the just and the unjust. Good Christian people we know and love – perhaps even we ourselves have faced devastating tragedy and sorrow. We have seen dear ones suffer, we have been let down by those we trust, we have been blindsided again and again, and we struggle to understand God’s place in our lives.

Listen how mixed the message was to those Exiles – Zechariah prophesied to them:

God will pour out the Spirit of grace and of supplication.

Sounds great, right? Grace… access to God through prayer. But the prophet continues…

They will mourn as one mourns for an only son… the will weep like the bitter weeping over a firstborn.

What’s that mean? God was speaking to his people… and to us, to say that he will be present with us. But he was also saying that life would still be full of pain and sorrow. That is just the way it is.

Would anyone really argue to the contrary? Would anyone take an honest look at life and say that there is a rosy path through the thorns? Is there pain-free life to be had? That is simply not the testimony of scripture, nor an honest approach to life.

The solution – God’s solution – to life is just as complex as life is. Should God just snap his fingers and make all things right? No - Zechariah spoke of God’s solution, and it is no easy fix!

The will look on Me whom they have pierced.

What in the world would that have sounded like to the Hebrew people that heard it. God was high and holy – revealed in history only as a fiery cloud or a mighty storm, and perhaps to Moses, whose face had to be covered to protect his life from the encounter. And now God is saying that his people will look on Him! And PIERCE him. The prophesy says that the outpouring of God’s Spirit would result in or accompany the wounding of God Himself. Unthinkable!! That God should suffer that we might know grace? I’m not sure how those listening to Zechariah could have interpreted that.

I do know that Zechariah’s prophesy would have rang with astounding clarity to those standing at the foot of the cross. This teacher who had claimed kinship with God was suddenly pierced through. Unthinkable!! Yet, Zechariah somehow links that unthinkable act with the outpouring of God’s grace.

A fountain will be opened… for sin and for impurity.

The fountain was the blood of Christ, the shocking tragedy right there in front of Jesus’ followers. Did any of them also remember his teaching that he was a “fountain of living water” – who would bring the outpouring of the Holy Spirit of grace?

As the choir sang last Sunday, the cross was the culmination of God’s response to the human condition. The cross was God’s answer to the problem of being human and trying to survive in this world. The cross was God’s declaration to us of his love, his identification with our suffering, and his invitation to hope.

The wounds of Christ – the water, the blood – they were God’s gifts of love to us, to do for us what we could not and cannot do. We cannot defeat death; we cannot overcome sin; we cannot beat back evil. But God can and God did – in Jesus, on the cross.

The Reach of Love

Are you hurting? Have you suffered? Are you disappointed with God? Listen to this good news – and it is good news. God loves you and knows the depths of what you have experienced. He has taken the hurt of the world into himself so that we might have hope.

Is there a magic and happy ending to Jane Wall’s story? God did not miraculously heal her, if that’s what you’re wondering. God did spare her life. God has kept her safe for 22 years now. God did move and work in her parents and in my friend to keep them together and strong in Christ in a situation that would have torn many families apart. God did teach me, through their faith, what it means to trust and hope even when disappointed. It’s no more than that, and no less than that. And my testimony is that God has been faithful and true.

God’s reach is wide and his love strong. Listen to these scriptures set to music. Listen to God’s response to our lives – as complex as it is complete. Jesus Christ has been pierced for us to show us the full reach of God’s love.

Just needed to upload a new graphic for iTunes.  :) 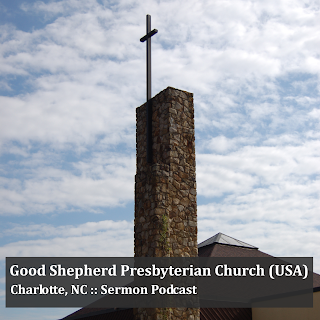