Check out the New Website and Sermon Section at
https://gspc.net/sermons

Hint: if you are searching for a sermon by scripture reference,
try using the Blogger search bar at the top left of the screen,
use the full name of the Bible book, and the chapter only. (e.g. "Matthew 3")
Then 'sort by date' may give more useful results than the default 'sort by relevance'. 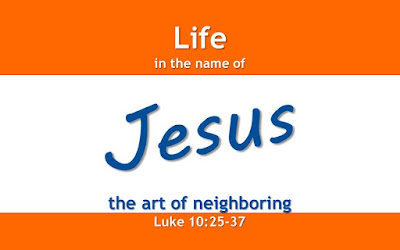 :: Sermon Audio (link) :: Click link to open and play in browser; right-click to save. Sermon audio is also accessible as a free podcast in iTunes. Search for "Good Shepherd Sermons" or "Robert Austell."

::: Music ::
He Saved Us to Show His Glory (Tommy Walker)
You Have Shown Us (Baloche)
Lord, Whose Love through Humble Service (BEACH SPRING)

:: Sermon Manuscript (pdf) :: This manuscript represents an early draft of the sermon. Some weeks the spoken version varies more than others from the early manuscript. Nevertheless, if you'd prefer to read than to listen, this is provided  for that purpose.

We continue today in our series called “Life in Jesus’ Name.” And one of the things Jesus talked often was being a good neighbor. So, when I heard that about 100 churches in Charlotte were taking part in a city-wide sermon series called “The Art of Neighboring” I thought that would be a perfect fit for our own series. So for three weeks we are going to be talking about being a good neighbor along with 100 other churches. We’ll all be looking at the same scriptures and stories. And today the primary passage is one of the more well-known parables of Jesus, often called “The Good Samaritan.” Jesus shared this story to answer the question, “Who is my neighbor?” And that’s what we want to look at today. 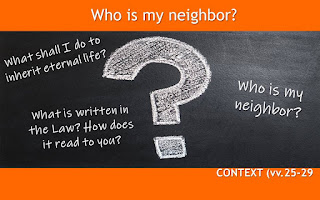 This parable wasn’t told in a vacuum. There is a very definite context to it, so I want to remind you of that. A lawyer – which was an expert in the Jewish Law, the Torah – came to “put Jesus to the test.” All that’s important: this wasn’t a casual teaching moment, but Jesus being tested in his knowledge and interpretation of the Torah. The question? “Teacher, what shall I do to inherit eternal life?” (v.25)

In good Rabbinic fashion, Jesus asked a question back: “What is written in the Law? How does it read to you?” (v.26) This questioning not only established Jesus as the teacher and the lawyer as the student, it also made the lawyer put his cards on the table. It became a test for the lawyer instead of for Jesus!

And the man was an expert – he pulled from two different parts of the Torah to give a commendable answer. He quoted the Shema “Hear, O Israel!” in Deuteronomy 6, with its command to love God with all one’s heart, soul, mind, and strength. And he drew from a commandment from Leviticus 19:18 warning against vengeance, ending with “you shall love your neighbor as yourself.” And putting these two together was an excellent summary of the Law. In fact, this might have shown up someone other than Jesus. What could Jesus possibly add to this combining of different parts of the Torah? Would Jesus have to acknowledge the man’s mastery and give up some of the Rabbinic authority he had just claimed?

No, Jesus continued in the role of teacher, commending the man’s answer, but then telling him to DO it in order to live. Now this was a teacher who really understood the Law. It wasn’t just for quoting; it was for living! And the lawyer was left a bit speechless. Next we read that he was “wishing to justify himself.” And isn’t this where we sometimes find ourselves as well? It’s one thing to talk church and talk faith; it’s another whole thing to live it out. Easier just to keep discovering new questions to chase down! And that’s what he did. He asked Jesus the question that sets up the parable: “And who is my neighbor?” (v.29) 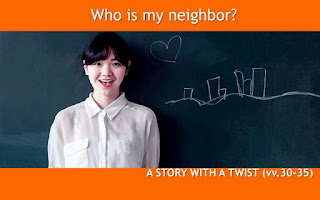 I’ve talked before about parables. They are a special story-form that Jesus used often. We often want to read them as allegory, which is a more recent story-form where every single thing in the story lines up with something or some point to be made. But a parable usually had ONE main point and it was usually delivered on an unsuspecting audience like the punch line to a joke. And the more the audience doesn’t see it coming, the better the punch.

You probably know the twist in this story. There is a man robbed and beaten on the road between Jerusalem and Jericho. And people start to pass him. Don’t forget the question that prompted the story: Who is my neighbor? A priest comes down the road; surely he will do what God’s Law requires. But he passes by on the other side. Then a Levite comes down the road. Realize that these are not just religious people who we might expect to do good. These are experts in the Law, just like the lawyer. And Jesus’ response to the lawyer was “DO THIS and live.” Neither of the experts in the story DO the Law.

And here comes the twist. A Samaritan man comes down the road and sees the beaten man and stops to help. Now you know this, but I’ve made this character swap before: the man beaten on the side of the road wasn’t the Samaritan; the man who stopped to help was the Samaritan. It would have been a strong enough story to tell of two religious Jews who passed by a Samaritan, with a third who stopped to help. But that’s not the story. The Samaritan was the one who DID God’s Law. The Samaritan was the one who loved his neighbor.

And that’s the bottom line of Jesus’ parable. The twist was the surprising actor in the story – a Samaritan. But the teaching was doing mercy – not just knowing the Greatest Commandment, but DOING the Greatest Commandment. And the punch for Jesus’ audience was that if a non-Jew (in fact, someone despised by the Jews) could keep God’s Word, then surely one who loved God and God’s Word could keep it. The message to the lawyer was: knowledge does not equal faithfulness. Check yourself; check your actions!

And indeed, that’s the message here for us. We talk quite a bit about being a neighbor. We rightly understand ourselves to be a neighborhood church. But do we DO neighboring? Do we show mercy as God would define it? Do we see the community and world around us with the eyes of God, seeking to serve rather than be served.

I want to show a 60 sec. video clip from the CROP Walk. It’s called “Who is your neighbor?”  [youtu.be/FGycqm6WTqg]

The CROP Walk is one way to show mercy to neighbors near and far. It’s action – walking or supporting a walker. And it goes to help hungry neighbors in Charlotte and throughout the nation and world. I hope you will check in with Leslie in the welcome area. 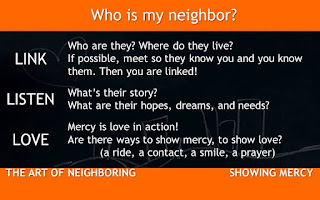 But the CROP Walk is just one example of showing mercy. As the video showed: your neighbors live on your street, they live in our city, they live in other places. And Jesus said being a neighbor to them is showing mercy. How do we do that? I want to suggest three ways to get started.
May God open eyes and doors and hearts that we might do those things we read about, sing about, pray about, and believe! With God’s help, Amen.
Posted by robert austell 0 comments